Waterproof: A Novel of the Johnstown Flood by Judith Redline Coopey 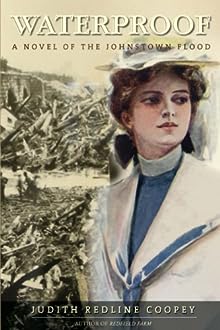 Book:  Waterproof: A Novel of the Johnstown Flood

This is Judith Redline Coopey's second novel.  I reviewed her first book, Redfield Farm, back in February.  Unfortunately, her first book was her best book.  I find that this often happens with authors.  They get something published and then they rush to write the second book, per the orders of their agent, bookseller, whatever, and then the second book has gaps and issues that weren't present in the first.

That seemed to be the case with Waterproof.  It isn't to say that this book wasn't accurate or interesting, it was both.  But, the story line and the dialogue needed some work.   This book is about Pam an older woman who survived the Johnstown flood and relives the experience through her interviews for the town newspaper 50 years after the flood. The story has very little about the actual flood, but is really about the aftermath and how people dealt with the deaths, changed relationships, and the negligence of the South Fork Hunting Club.

The historical bits were very good.  After reading this book, we caught something on the history channel about Rockefeller and the South Fork Hunting and Fishing Club which was then accused of negligently damming the river and lake that caused the Johnstown Flood, and I realized that the book was very accurate.  Of course, historical fiction writers take liberties with characters and dialogue, but the book came across as accurate to the time period, the reactions of the townspeople, and the facts about the flood.

The way the story was presented was dicey.  The author necessarily had to show the main character's reflections and memories but, the way this was done was very elementary.  For example the main character would drift off to sleep and have a dream about her brother dying in the Flood or whatever was supposed to happen next in the story.  This happened over and over again and became tedious and distracting.  There have to be other avenues to "go back in time" and show a character's memories.

This book was a very average C+.  It was interested because I've never read anything about the Johnstown Flood, but the choppy story structure and dialogue was a huge distraction.