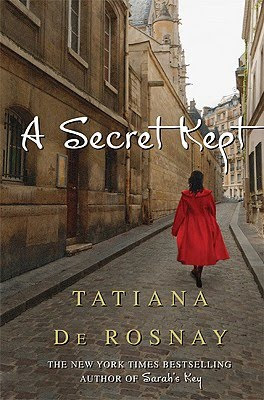 Recommended To:  Divorcees, People who didn't read her first book.

I didn't have very high expectations for this book because it is a second novel by a successful-first-novel author.  Usually the second novel isn't great.  I think this is because really good books don't happen overnight.  These first time authors get super successful and they want to capitalize on that success with a second book immediately when really they should engage in the editing process a bit.

That's what happened with this book.  I mostly liked Sarah's Key, the author's first book, but was not a part of the group of readers who thought this book was astronomically good.

The real issue with A Secret Kept is the characters.  The narrator is a middle aged man who can't communicate with anyone, his dying father, his grandmother, his sister, his children.  This is so far outside my family experience, I found myself getting frustrated with the narrator.  I just wanted him to man up already and ask his kid why he was getting in trouble with the law.

The other problem is that the secret builds and builds but then is only a little shocking.   You find out that narrator's mother died early, in her mid thirties, and then you find out that she was having an affair, also early on.  So, you aren't sure what the secret could be and generally it is disappointing for the amount of buildup.

To this book's credit, I was wrapped up in it while I was reading.  It was a compelling story even though I was annoyed occasionally at the characters and the plot.  A lot of stuff happened that was out of the blue and kept the story moving.  de Rosney also has a gift for describing scenes and experiences that makes the story quick and light.  She doesn't drag the story down with a lot of pretentiousness and poor writing.

So, If you read de Rosney's first book and loved it - I can imagine that your hopes might be dashed reading this one.  But, if you had low expectations to begin with, this book is a solid fast read.  I finished it in about a day.  This has been a hell of a week for reading.  My new job starts tomorrow, so I can only imagine how many hours I'll be working and how little time I will have to read and update this blog.