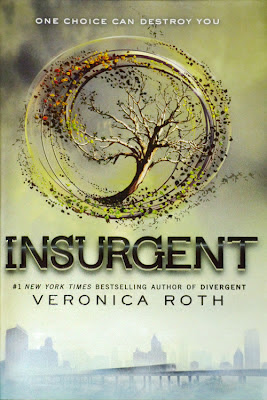 Recommended To:  I have no idea, teenagers?

Insurgent is the second book in the Divergent Series penned by Veronica Roth and loosely based in Chicago.  I reviewed the first book Divergent on this blog and am writing the second review so quickly because these books take about 10 minutes to read.

There are SPOILERS in this review.  So, approach with caution.

I have no idea what happened in this book. The relationships were bad, the motives were all wrong, and the twists and turns were seriously contrived.  That said, I liked this book slightly more than Divergent, although my grades don't reflect that distinction.  It is hard to remember why something was a C or a C-, days and weeks after finishing the book, which is why the grading on this blog is subjective.

This opinion is going to be unpopular:  Why don't Tris and this fool Four just break up?  As far as I can tell, they have been dating for approximately 10 minutes.  Much too soon to be having deep conversations and arguments about trust.  And, if you don't trust someone after dating for 10 minutes, then it seems unlikely that you ever will, so just break up, and find someone else.  The parts of the book about Tris and Four were not romantic, it is a relationship of convenience and cuddling and crap.  I don't buy it.

Can I get some hands up from the people that hate the name Tobias?  This guy has a friggin awesome nickname, Four, and is all emo-whiney "but I wanna be called Tobiaaaaasssss."  Relax.

The plot is still thin in Insurgent and many of the plot twists are ridiculous.  It makes zero, none, nada, zippo sense that Peter would save Tris by giving her some serum that makes her appear dead.  Allegedly he does it so that he isn't indebted to her anymore, but her dying would also make that debt moot and not put a gigantic target on his back.  This doesn't make sense with the character development so far.  I think Roth backed herself into a corner with this Tris-going-to-Erudite plot line and then didn't know how to get her out.  Plus, why the hell is Peter in the upper echelon of Erudite if he defected to the Divergent?  I am expected to believe that the most boring smartest faction would put a defector on the security team?  No.

So, despite these fallicies, I found myself enjoying Insurgent more because  I rolled my eyes fewer times while I read the book.  That's the new standard of reading.  The number of eye-rolls.

I am currently reading Five Days at Memorial and I have high hopes that a good non-fiction will put my reading agenda back on the right path.