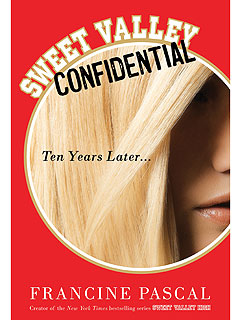 Recommended To:  Sweet Valley High Fans will think they had terrible taste as a pre-teen reader.

Okay, I don't have a problem admitting that I read almost every single Sweet Valley High and Sweet Valley Middle School book that Francine Pascal thought up.  I even read the weird Christmas special ones where Elizabeth ran away from home and met the ghosts of past, present and future.  I loved these books - and when I found out that Pascal was writing a catch up book "Ten Years Later,"  I immediately put it on my birthday list.

Thank God I didn't pay for it myself.  (Sorry, Mom!)  I'm not sure if I just didn't have any discretionary taste as a 13 year old or if the books had a much higher writing quality.  Somehow, I think it is the former.

The writing in this book - blew.  That's to put it simply and accurately.  The sentences were often weird, misshapen blocks of words that I had to read more than once to even figure out what was going on or who was speaking.  Okay, I consider myself a prolific reader and fairly smart, so if I can't even figure out what is going on after reading a passage twice - then I want to use the book as firewood.

The storyline was also incredibly disappointing.  There are going to be SPOILERS so stop reading now if you don't want to know what happens.   Or just skip the bullets - whatever.

God, are you bored yet?  I am.  If Jessica was such a slut and has been married three times - then wouldn't she have a few kids by now?  I want those "perfect size 6" bodies to change a little bit, add some flab here and there, live on food stamps for a while, don't get your perfect job at 27 right out of college.

The worst part is that the characters haven't actually matured a bit.  They all act like they are still in high school.  The parts narrated by Jessica have a bunch of extraneous "likes" and "Sos" thrown in just to keep up that valley girl appearance.  Francine, you can't possibly expect me to believe that she has gotten ANYWHERE in life or at her job talking like that.  No, its like so not possible.  I don't care if she works in makeup.

Elizabeth, always the more mature sister - hasn't changed - she is still ridiculously, annoyingly perfect, except now she is also angry.  Oh, and she sleeps around too.  It is as if Francine just added some swear words, let the twins have sex, and live on their own and then boom!  magically they are adults.  No.  That's not how life works.  They still act, speak, and think like teenagers.   Also, there's no way that Elizabeth could pay Midtown Manhattan rent with a job at a blog - AND eat take out?  I don't think so.

I am so deeply disappointed.  I might write some fan fiction and send it to Francine just to show her where she went oh so very wrong in writing this monstrosity.  This book felt like my childhood had been ripped to shreds - thank God no one has ever done this to the Boxcar Children.

I hope you enjoyed this post - I would love to hear what you think of SVC - Ten Years Later.  Here's what the good people at Goodreads thought.