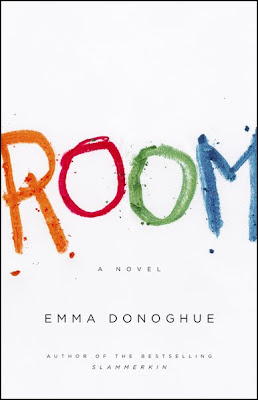 
I have been doing some super boring work and thought that instead of podcasts, I should "read" an audio book to pass the time.  This turned out to be the best idea of my entire life and I chose Room as my first audio book because it got excellent reviews and is the June book for my book club.

Let me start by saying that some of my review might be colored by the fact that I "read" this as an audio book.  This book was read by four different people that did the various voices for the characters, which made it super excellent, but also ran the risk of being annoying if you don't like the voice of one of the readers.

If you haven't heard of  Room it is about a woman who was kidnapped and held as a sex slave by a man that is only known as "Old Nick."  She has a baby with this man and she creates an entire world for she and her son, Jack in one room.  They finally escape (this isn't a spoiler because the back of the book says it) and the last half of the book is about Jack and his mother's readjustment to the outside world.

This is a really fantastic book about the love between a mother and her son and her incredibly ability to keep him alive and happy in an 11 x 11 room.   Once they get out, Jack is shocked to learn that other people exist, that there are many copies of books and toys, and that he might occasionally be separated from his mother.

There are a few parts of the book that just seem callous.  For example, Jack's uncle wants to take Jack to the museum, a mere week after he has been in the "outside."  They stop at a mall and are shocked when Jack flips out from being in such a huge place.  It was surprising that his family members would not immediately put the child first and consider how he might react to all of these new things.  Even the mother had a few shocking bits after the escape, but as a reader, I had to remember that she had been trapped in the same room for the last 7 years.

This book was absolutely intense, riveting and comes highly recommended by this blog.  I enjoyed that this was an audio book because it was easy to keep track of the characters, was extremely easy to listen to (and do some work) and seemed well done because of the various voices.  You should check this out if you haven't.  It made a ton of book lists in 2010 and for good reason!

I have a couple of other audio books to listen to, including Michael Connelly's newest; The Fifth Witness.  Look forward to that review and to a review of The Help, April's book club pick!

Email ThisBlogThis!Share to TwitterShare to FacebookShare to Pinterest
Labels: B, Emma Donoghue, Fiction