The Silent Man by Alex Berenson 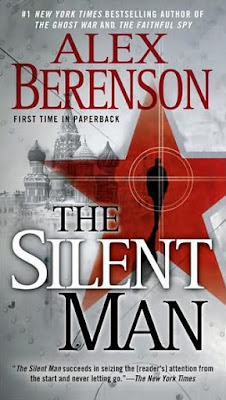 Recommended To:  Spy Fans who want a book to be over as fast as possible.


This is Alex Berenson's third book in the John Wells series.  I also reviewed his second book and you can find that review here.  This book was better, but Berenson needs to work on his character development and either needs to ditch the romance or improve upon it.

This book is about some terrorists that obtain two nuclear bombs from the Russian arsenal and then bring them to the United States to dismantle and use in their own "special weapon."  His words, not mine; but that phrase kept making me thing of a bad romance novel instead of a spy/thriller.  In a sort of unrelated story line, a guy from the second novel also tries to kill Wells, but instead shoots his GF, Exley.  And, Wells, being the completely one-dimensional character that he is, can only think about revenge.

Here's the first problem.  These characters are so flat!  Wells has zero personality and all he wants to do is kill kill kill.  That makes for a very fast read, but not necessarily for a good story.  Also, Wells doesn't do anything that the CIA tells him to do.  He goes rogue a lot, which lends an unrealistic element to this novel.   Sure, he's a national hero from Book #1, but does he really lack all common sense?  Apparently so.

The second problem is that the romance between John Wells and Jenny Exley is one of the worst that I've read in a spy/thriller novel in a very long time.  For example, she gets shot and he hangs out by her bed for a while, but can't think of anything else but murdering the guy that he thinks did this to her.  So he leaves her, and of course she asks him not to go, but he does anyway.  At this point, I just want them to break-up.  He has earned the worst-boyfriend-of-the-decade award, and I mostly want her to succumb to her wounds so I never have to read about their "relationship" again.  Berenson tries to describe the characters' emotions with their actions and it makes for an extraordinarily thin love story.  In my opinion the entire line needs to be scrapped.  These books would be better without it.

Finally, and I know I'm going long here, Berenson spends 98% of the novel trying to find this bomb.  Russia is playing games, the terrorists are dismantling the "special weapon" in extreme detail,  Wells is flying all over Europe and terrorizing children, and then BOOM, the story is finished in literally 5 pages.  All because Wells sees an SUV that is probably carrying the bomb.  Sigh.  I felt like I invested a lot of time in reading the first 98% only to be totally let down by the lack of action at the end.  Let's be honest, we only read these books for the action and this failed.

Either way, this is a very fast read and I recommend it to people who love spy/thriller novels and don't much care about the substance or characters in the story.
Posted by Jillian